For to full list of every production by Borderline Theatre Company, have a look at our Past Productions page.

“Those were the days when you could go talk to folk and you didn’t need to have a barrel load of forms filled in. Sandy Dunbar was the director of the Scottish Arts Council and they just charmed him. They said ‘we want to start a theatre company in Ayrshire’ and he said ‘we’ll give you half the money!’”

The brainchild of Brian and Shelagh Tutchener, Borderline Theatre Company was formed in 1974 from a base in Irvine at The Harbour Arts Centre and really was an idea ahead of its time. Their ethos: ‘Well…theatre’s good, and we think more people should enjoy it!’ Quite right.

The name ‘Borderline’ came from our first Artistic Director David Hedley’s patchy knowledge of Scottish geography at that time, thinking that Ayrshire was close enough to the Borders to be near the Borderline. It stuck though, as the work Borderline does has always been on the borderline between conventional and community theatre.

“Billy Connolly came into the hall, which was bursting with his fans, but was scarcely noticed. There had to be something pretty special going on for that to happen.” // The Evening News 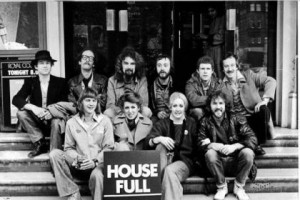 In its first two years alone, Borderline toured eighteen productions across Ayrshire playing to audiences in venues ranging from a converted Nissen huts to Victorian town halls. The company had established themselves as a nationwide force, selling out London’s Royal Court with a three week run of Billy Connolly’s An Me Wae A Bad Leg Tae. The audience response was overwhelming, with demand resulting in two additional tours shortly after of over 100 performances. The Big Yin said of his play: “Sure, there’s some swearing in it. But  people don’t call each other rapscallions in Maryhill,”

We’re quite the Dario Fo fanatics here at Borderline; since 1983 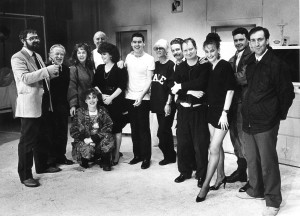 “Some of the best years of my life were spent at Borderline, the money was crap but I was happy.” // Gregor Fisher

The 90s brought more successes and awards. Robbie Coltrane’s one-man tour de force in Mistero Buffo was screened on BBC2 in 1990, a third Fringe First Award arrived in 1993 for A.L. Kennedy’s The Audition, and the 1993 Evening News Capital Award was added to our mantelpiece for The Guid Sodjer Schweik, adapted from Jaroslav Hasek’s novel.

In 1994, Borderline toured perhaps the most famous and memorable production in our 41 year history. This was Neil Simon’s The Odd Couple starring Craig Ferguson and Gerard Kelly, which was the smash hit of Scottish theatre that year, playing to almost 30,000 people in 52 performances. In 1997 the company toured Martin Crimp’s version of Molière’s The Misanthrope, which was hailed by critics as “a cracker of a production” and “the highlight of the year”.

In our 122nd production in 1998, playwright Chris Dolan began his working relationship with us in our fourth Fringe First Award winning Sabina!, a bittersweet Glasgow comedy that we later in the year took to London. He later adapted Sabina! into a radio play for BBC Radio 4 in 2000 and we revived it in our 2014 Play Readings Old and New event. This was followed by the huge hits of Dolan’s The Angels’ Share and his inspired adaptation of Benhard Schlink’s novel The Reader, which was praised as “taut, demanding and vital”.

In 1999, when Borderline were only 25 years young, we celebrated by producing the Scottish premiere of Kevin’s Bed by Irish playwright Bernard Farrell. In the programme notes, Farrell professed the simple wish that his work “makes buying the tickets, contracting the babysitter, and parking the car worth the effort”, with the Irish Ayckbourn certainly having his wish being achieved as his “ability to give real pleasure to big audience is an asset to be cherished”.

“Audiences were in for something exceptional” in 2001 in our co-producion with Tron Theatre of Douglas Maxwell’s Our Bad Magnet, in association with the Scotsman Assembly. Originally produced as “a penniless student production” one year earlier, we revived the production with the same cast and crew. We continue to be in development with our Ayrshire associates in playwrights Maxwell, DC Jackson and Johnny McKnight.

2001 also saw us work with Marie Jones on Women on the Verge of H.R.T., a wistful comedy of menopausal crisis. It went down so well with critics, audiences and venues that we soon ran another tour of 33 dates in spring 2002, which ended up being one of our most popular productions. It saw us play to a total audience of almost 19,000 over the two tours, hailing an astonishing 93% attendance rate on the second tour.

Our relationship with renowned Scottish playwright Liz Lochhead is one of our most cherished. After being the first company to commission her for a stage play back in 1988 with Shanghaied, we reunited in 2002 for Perfect Days – a brand new production with a fine line in Glasgow patter and a lot of heart – and followed up by premiering our commission of Lochhead’s Good Things two years later. Here, Una McLean was nominated for Best Actress in a Supporting Role at the 2002 Barclays Theatre Awards. 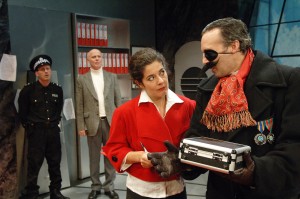 Gerard Kelly made his triumphant returned to us in 2003, after starring in 1994’s The Odd Couple alongside Craig Ferguson, to direct our second production of Dario Fo’s Mistero Buffo. This time it starred an “almost Godlike” Andy Gray, who took over from Robbie Coltrane in our previous production in 1990.

“This play contains Nudity, Strong Language, and is Very, Very Funny.” So was the tagline for Dead Funny by Terry Johnson, Brian Pettifer’s directorial debut in 2004 after 10 productions performing with us. And it was indeed just that! 2005 then saw the company revive two hit tours with audiences – Stephen Greenhorn’s road-move for the stage, Passing Places and a new version of Dario Fo’s classic Accidental Death of an Anarchist, which the Times called a “rip-roaring night out!”.

In 2006, our near lifelong core funding from the Scottish Arts Council was removed, forcing us to shift in strategy and reduce our output. With our remaining funding we toured Spending Frank by Alistair Hewitt and Losing Louis by Anthony Mendes da Costa in 2006. Despite this unexpected dramatic shake up to our operation, we have persevered to not only survive but thrive artistically despite the all too frequent challenges of being a subsidised theatre company in Scotland.

All of our subsequent productions have garnered critical acclaim, many of which gave playwright DC Jackson a platform to emerge and entertain us all in his hilarious Stewarton Trilogy of the CATS Award winning The Wall, The Ducky and The Chooky Brae. Kenny Miller directed the conclusion to our Ayrshire small-town rites-of-passage smash hit and Sally Reid completed a trio of terrific performances. Jackson’s subsequent play My Romantic History, winner of a Fringe First Award, gave us our tour in 2011. Jemima Levick returned to us after The Ducky to direct this brand new, updated production that and reunited us with our figurative son for our fourth successive success together.

To celebrate our 40th anniversary in 2014, we toured a revival of David Harrower’s “superb” and “riveting” A Slow Air, which Harrower also directed. We concluded the year with our Play Readings Old and New event where we presented extracts of 12 plays from our past and potential future. In 2015 we presented the first Scottish tour in 27 years of Sue Glover’s The Straw Chair in 2015, visiting 20 venues and touring to the Western Isles for the first time in decades. We were delighted to win our second CATS Award in 2016, this time for Best Production for Children and Young People, for Uncanny Valley. Written by Rob Drummond and directed by Emily Reutlinger, the show was commissioned by Edinburgh International Science Festival and was performed at the Festival in 2016 and 2017.

The loss of our contemporary powerhouses such as Wildcat, 7:84, Communicado and Theatre Babel  has been tough accept and adjust to. At the time, we thought that the move would “create a wasteland outside the main cities in diversity of drama provision”. However, the magnificent tradition of Scottish touring theatre lives on in their absence. Through recent adversity and ever changing funding structures, Borderline have continued to and will continue to produce innovative and exceptional touring theatre to communities across Scotland. Now based at the Gaiety Theatre in Ayr, we are grateful for the vital support that they provide to help develop and tour our work. Against all odds and expectations, we have risen from the ashes like a phoenix – a slimmer phoenix, but a phoenix nonetheless.

Here is our legendary long time producer Eddie Jackson, a man who likes to brag about bringing Miles Davis and Duke Ellington to the Apollo, on what motivates us to continue producing work in this wonderful and rewarding industry.

“Theatre is special, it’s magic. During the dress 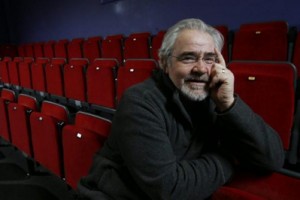 rehearsal for An’ Me Wi’ a Bad Leg Tae, I was in the dressing room talking to Billy Patterson as he was rouge-ing his face and putting this mustache on, as he was playing a 70 year old shipyard worker. Billy Connolly, Stuart Mungall and I were sitting in the auditorium – the only people for this dress rehearsal – and near the end of the show the character that Billy plays has a heart attack. I kid you not – when this character had a heart attack I started crying. Now, an hour and a quarter before I’d been watching this man rouge his face and put false mustache on and yet that is the magic of theatre. I was astonished by my reaction. It forced its way through all this knowledge you have, it forced its way through into your emotions.”